On 15th September we held our Autumn beach clean as part of the Marine Conservation Society's Great British Beach Clean Weekend. We were joined by 56 amazing volunteers who came along to lend a hand and together we removed 30 bags of litter from the beach plus a number of plastic containers.

There was the usual large variety of rubbish picked up with lots of small blue plastic straws, a few paint cans, a small buoy and a large amount of plastic rope mixed in with the strandline.

For one member of staff and a volunteer there was a fantastic wildlife encounter as an Arctic Skua chased a Sandwich Tern over the shingle ridge before the sandwich tern regurgitated a large Sand Eel and it was caught in mid-air by the Arctic Skua.

One of our National Trust volunteers has also been encouraging conservationists on the Yemeni island of Socotra with a clean-up of plastics on their shores and estuaries. They had an event, like ours, in early September and you can see some photos below. It is good to see such concern and that efforts to combat ocean litter are being made world-wide. 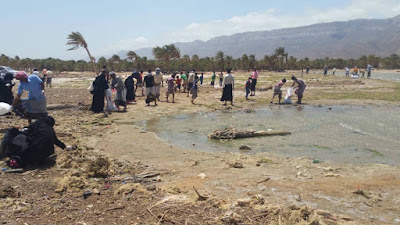 Thank you to everyone who took part and keep an eye out for our next beach clean which will be Saturday 30 March 2019. We hope to see you all there.
Posted by Norfolk Coast National Trust at 12:14