This summer, Sandwich Terns on Blakeney Point, Norfolk, have been fitted with coloured lettered rings to enable scientists at the British Trust for Ornithology to further understand their movements.

In partnership with the National Trust, over fifty Sandwich Tern chicks have been fitted with unique numbered and lettered rings at Britain’s largest colony on Blakeney Point, Norfolk, with the aim of understanding, when and where young and adult birds go once they leave. 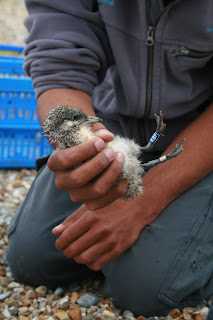 Do they disperse a short way along the coast just after breeding? Do they move out of Norfolk altogether and move south, or is north the initial direction they take? With the help of members of the public and birdwatchers that visit the coast over the next few weeks, the answers to these questions, and many more, will be uncovered by scientists working on the project.


All that is needed is for keen-eyed beach-goers, who see any Sandwich Terns, to check their legs for rings with binoculars or a telescope. If any are seen they can be reported to the British Trust for Ornithology at colour.ringing@bto.org.

The Sandwich Tern is one of five terns that come to Britain to breed during the summer months. It is the largest of the five and is the only one that has a black bill with a pale tip. After breeding, Sandwich Terns leave the colony around mid-July, before leaving Britain for West Africa during late September and early October.

In addition to the movements in the UK, marking these birds with unique colour rings may also allow sightings to be gathered during their migration and in wintering areas. Do these birds stop off at certain places in Europe and North Africa, and where in West Africa do they spend the winter months? 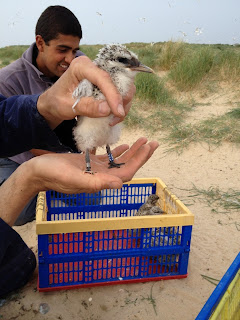 Volunteer, Jez Blackburn, project organiser, and an employee at the BTO, said, “There is great value in colour ringing these birds as the data they will provide will form part of a long term monitoring project at Blakeney. Sightings during the few months between leaving the colony and moving out of Britain will provide information about adult and juvenile dispersal. In subsequent years we will be interested in the return of these birds to their natal colony Blakeney (or their move to new colonies), and the routes they take to get back. The National Trust Rangers will also be able to observe them as breeding adults, giving an indication of their survival”.

He added, “Part of this project also involves research work in The Gambia each winter, where the Kartong Bird Observatory will be specifically looking for these birds, and have the very real and exciting possibility of seeing one of our very own chicks that was reared at Blakeney”.


National Trust Coastal Ranger, Ajay Tegala, said, “We are thrilled to be working in partnership with the BTO on this project. The National Trust Rangers spend a lot of time monitoring the terns on Blakeney Point during the breeding season, but there is still a lot to learn about their post-breeding movements. With the help of people looking out for the rings, we look forward to learning more about the journeys made by these most elegant of seabirds." Visitors are able to see the Sandwich Terns on Blakeney Point, in July and early August, from the seal boat trips that go from Morston Quay.
Posted by Norfolk Coast National Trust at 21:34