9th of June: Rings, chicks and a large sausage!

A few weeks ago we found a ringed Sandwich Tern on the Point. It turns out that it was ringed as an adult in July 1998 in Teesside (Northeast England). This means it was born in 1996 or earlier, as Sandwich Terns do not migrate north to breed until their second year. So this tern was at least 17 years old.


Continuing the theme of ringed birds, Richard Porter photographed this colour-ringed female Ringed Plover on the Point this week. This bird was ringed along the coast at Snettisham in 1999. She has been found breeding or holding a territory on Blakeney Point for at least seven years since 2003. 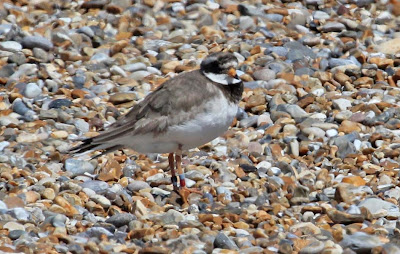 These two stories highlight how useful ringing birds is for getting more information about them. We will be ringing a sample of Sandwich Terns this summer in order to increase our knowledge about their movements.

Also this week, the first Oystercatcher chicks have hatched as well as more Redshanks. We were able to capture some footage of four Redshank chicks leaving their nest with our trail camera:

Unlike passerines (song birds such as Linnets and Meadow Pipits) which remain in the nest for several days after hatching, wader chicks can leave the nest the same day, like ducklings and goslings.

We have enjoyed watching Oystercatcher chicks running amongst the thrift in front of the Lifeboat House. The first one hatched on Wednesday. 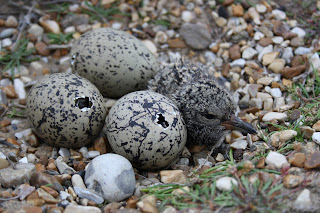 Other bird sightings include a Spoonbill in Pinchen's Creek on Saturday, which Matt managed to photograph. There are still a few migrants trickling through; today there was a female Pied Flycatcher in the Plantation. 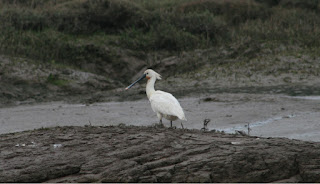 On Friday 42 Common Blue butterflies were counted. This is the highest record of Common Blues on the Point.
(Photograph by Richard Porter)

On a completely different note; you never know what you might find washed up on the beach. Our most recent finds include this large German sausage, which has proved delicious for lunch... 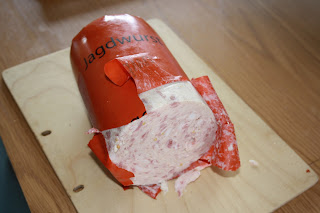 ... and these rather patriotic sunglasses: 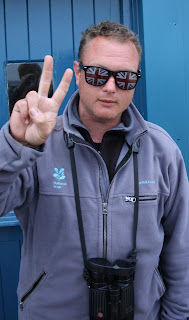 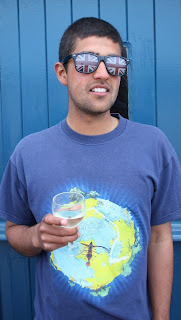 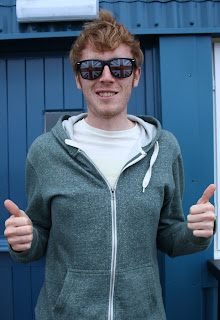