Despite it being a difficult start to the season for Little Terns, several pairs on Blakeney Point now have young. Our observations and research revealed poor feeding earlier on, with nesting significantly delayed. But, in the last week, feeding seems to have increased. A chick being studied was fed four times in an hour, which is a good sign. 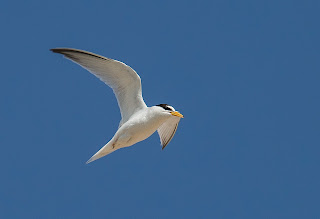 Back on the 29th of June, we found a shared nest on the very tip of the Point: a scrape containing one Little Tern egg and one larger tern egg, which we decided was either Common or Arctic (the eggs of these two species are very hard to tell apart)... 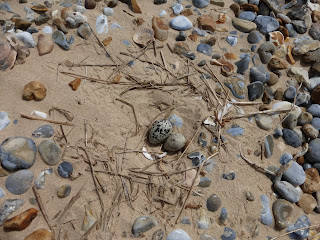 Like last year, we put a trail camera on the nest to find out more. This revealed that the eggs were being incubated solely by a pair of Arctic Terns. Presumably the Little Tern had abandoned. Or maybe - although unheard of - they were leaving the Arctic Terns to incubate their egg, like a Cuckoo does.

Well, on Thursday morning (9th July) around 5am, a Little Tern chick hatched. The chick was brooded and fed by the Arctic Terns... 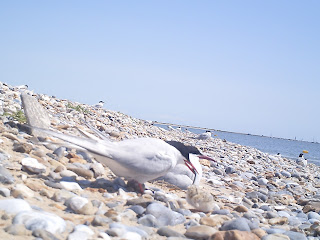 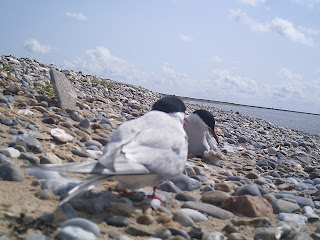 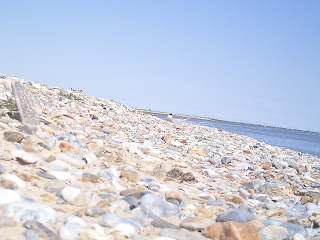 Sadly, at around 7.20pm that evening, both chicks disappeared. Frustratingly, the trail camera did not capture what was undoubtedly a predation event. Experience allows us to make an educated guess that a Common or Herring Gull was responsible. It is surprising that the camera was not triggered, as it is motion-sensitive. However, we can be fairly sure that the chicks were predated because the camera records several images of the adults looking around the scrape for a period of time afterwards; looking for their chicks, which had disappeared rather than wondered off. A sudden, sad end to a fascinating story.

Wader news
Several juvenile Oystercatchers can be seen across all parts of the Point. Many are now well-grown and almost capable of flight. 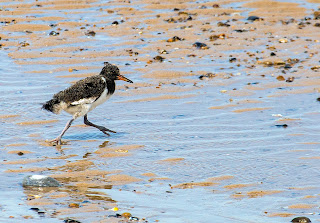 Another wading bird that is doing well on the Point is the Avocet. A record 16 pairs have nested on the shingle ridge this year. So far, 12 pairs have hatched between two and four young, with several family groups seen heading to Cley Marshes.

Like Little Terns, things seem to be looking up for Ringed Plovers. We are monitoring seven late nests across the Point. Three pairs have hatched young over the past few days. We hope the other four nests are also successful. 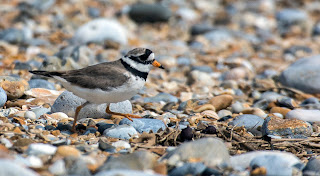 Other breeding birds
The trail camera on the shared tern nest also captured a female Mallard leading eight ducklings to the harbour. We wouldn't have known about them if it wasn't for the camera. 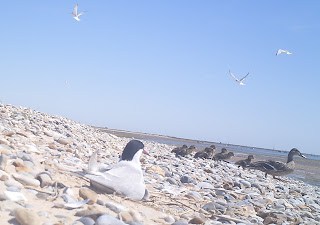 Insect news
Friday was a particularly magical day for butterflies. With dozens arriving in off the sea from the Continent. Mostly Whites. Some were flying low over the waves, while others were several metres high in the sky. A highlight from our recent moth traps was this Small Elephant Hawkmoth... 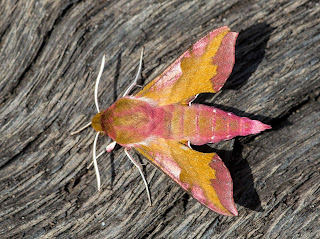 Plants
There is a terrific show of Yellow Horned-poppy at the moment on the main ridge. Seed was spread in the December 2013 tidal surge and this summer increased abundance is clear. 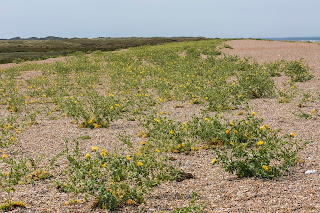 Seals
Today's low tide seal count recorded 647 Grey and 123 Common. Our "Tern Cam" on the tip of the Point captured this Common Seal rather close to the nesting terns... 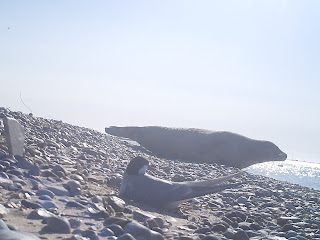